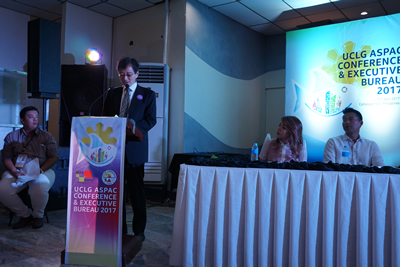 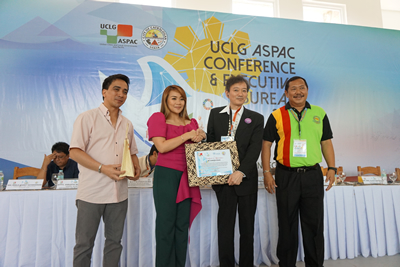 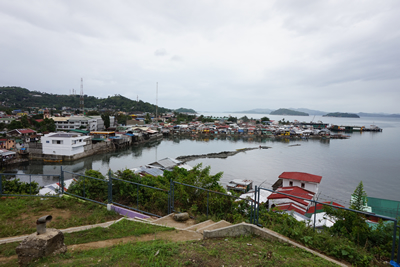 On April 6 and 7, 2017, the Workshop for Promotion of the Sendai Framework for Disaster Risk Reduction (SFDRR) was held in Catbalogan City, Philippines, and was attended by Sendai City officials.
This was staged by the United Nations International Strategy for Disaster Reduction (UNISDR) and Catbalogan City with the objective of the capacity development of municipalities through the “SFDRR 2015-2030” and the UN “Making Cities Resilient” campaign for disaster prevention. It was attended by around 100 participants including local mayors, governors, and disaster prevention personnel, mainly from Samar Island in the Philippines. Sendai City attended the workshop in response to a request from the UNISDR to give the keynote speech as a role model city for the said campaign.

At the Opening Ceremony held on April 6, a presentation was given on Sendai’s post-disaster reconstruction, specifically the efforts of various stakeholders. In the presentation, it was explained that there are three key points to post-disaster reconstruction when viewed from the perspective of the Sendai Framework for Disaster Risk Reduction: 1) initiatives for making urban infrastructure more resilient based on the principle of “Build Back Better”, 2) organization of multi-stakeholders in the area, and 3) appropriate support from the central government and improvement of local municipality capabilities for receiving support. They also presented on how secondary damage was kept to a minimum thanks to the vigorous involvement of neighborhood associations and other resident organizations. ?

On the following day, the Sendai City officials participated in a session by the executive committee of the United Cities and Local Governments Asia Pacific (UCLG-ASPAC※1) for local governments. The session was being hosted simultaneously by Catbalogan City at a separate venue. At this session, a keynote speech was given on Sendai city’s initiatives based on “Build Back Better” and contributions towards sustainable development goals (SDGs※2) for some 200 participants including deputy mayors and assembly representatives from municipalities in Samar.

In the Q&A session that was conducted following the speech, it was asked whether Japan has earthquake and tsunami warnings and whether it is possible to bind agreements with assemblies in other areas. The Sendai City officials sensed the extremely high level of interest that exists overseas regarding the recovery, reconstruction, disaster prevention and disaster risk reduction initiatives of Sendai City and the Tohoku Region.

※1  UCLG-ASPAC is a confederation that was established in 2004 with the aims of strengthening local self-government, promoting decentralization, and boosting the capacity building of municipalities. More than 1,000 cities from 95 countries and regions throughout the world are members including Shizuoka City, Hamamatsu City and CLAIR from Japan.
※2  SDGs are guidelines for the international community to eradicate poverty and realize a sustainable society by 2030, compiled as the final document of the UN Summit on Sustainable Development in 2015. 17 goals have been set up.