Educating Children - How to Make a Community "Disaster-resilient" 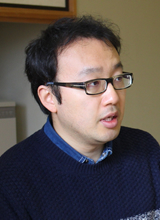 * An SBL is Sendai Bosai (meaning disaster preparedness) Leader who promotes public awareness of ORR and plans and implements community disaster drills in normal times, and confirms the safely of community residents, helps them evacuate, and does other things needed in times of disaster.

The Katahira Area is a residential area located in downtown Sendai. There are many single households or non-Japanese residents living in this area. When the Great East Japan Earthquake occurred, more than 1,800 people, including local residents, international students, and stranded commuters fled to the nearby elementary school etc., which was a designated refuge area. Based on these experiences, the “Katahira Area Local Community Planning Group" has been working on improving disaster prevention capacity in the community since the disaster. As a result of their efforts, the group created “Disaster Action Maps" and started to distribute them in 2015, with the English version being released and distributed in 2017. In addition, children who were 1st graders of elementary school at the time of the disaster formed the "Katahira Children's Community Planning Squad" fve years after the disaster to conduct various activities to help make the Katahira area a better community. 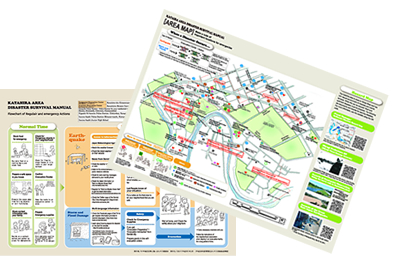 In recognition of their efforts towards disaster risk reduction, the Katahira Area was designated as a model area for the Local Disaster Risk Reduction Plan by the Japanese Government in 2016. An event called “Disaster Risk Reduction / Treasure Hunting Game" was carried out in March 2017 as a model project. A total of 63 people, including elementary and junior high school students and non-Japanese residents, participated in the event. This game aims to raise the consciousness and awareness of each participant as a protector of the community by strolling around Katahira area to check the location of evacuation centers while learning about local history and culture.

▲Handing out of treasure hunting completion certificates at the closing ceremony

In order to improve disaster prevention capacity in the community, we think it is important that all members of the community co-operate with each other and also increase the number of diverse leaders involved in disaster risk reduction. Young members in our group play an active role in holding disaster drills or planning events that people can enjoy together, regardless of age or nationality.

We would like to continue passing on the charm of our community in which we grew up and the importance of disaster preparedness to the next generation. By doing so, we hope to widely promote making communities "disaster-resilient".