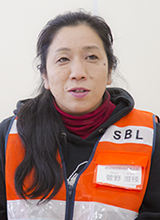 * An SBL is Sendai Bosai (meaning disaster preparedness) Leader who promotes public awareness of DRR and plans and implements community disaster drills in normal times, and confirms the safety of community residents, helps them evacuate, sets up and operates evacuation centers, and does other things needed in times of disaster. Currently, Sendai City has 600 SBLs.

Protecting our residents and communities from disasters

"In 2010, a year before the Great East Japan Earthquake, I began working with other community residents from all walks of life to draw up a "Disaster Risk Reduction Declaration by the Women of Iwakiri" and conducted DRR activities, including communicating messages about the importance of self-help and mutual help in times of disaster. I began working as an SBL because after I experienced the Great East Japan Earthquake in 2011, I became acutely aware of the need for disaster prevention and drills as well as practical knowledge about evacuation center operations.

Currently, my colleagues and I are helping bring women's perspectives to our community DRR manual and focus on communicating our experiences and lessons learned from the disaster.

We have introduced the Disaster Risk Reduction Declaration by the Women of Iwakiri, which was revised to reflect our disaster experiences, at a public forum at the Third UN World Conference on Disaster Risk Reduction in 2015 and through our lectures held at various venues around Japan. In February and December 2016, we introduced our activities to DRR officials from Nepal, Sri Lanka, Pakistan and some other countries who visited Sendai to participate in a training course on Gender and Diversity in Disaster Risk Reduction hosted by the Japan International Cooperation Agency (JICA), and gave them a tour of a warehouse for emergency supplies in our community.

The Sendai Framework for Disaster Risk Reduction 2015-2030 also underlines the importance of self-help, mutual help, and DRR activities for women and children. We will continue to communicate our experiences of and lessons learned from the disaster as well as our citizens' voluntary DRR activities to people around the world in the hope that they will be able to better protect their families and communities from disasters."

This warehouse holds emergency supplies to enable about 400 evacuees to live in the evacuation centers for about two days. The emergency supplies include drinking water, crackers, instant rice and portable toilets. Sendai City stores such emergency supplies at its designated refuge areas, ward ofices and other places. The city also has about 130 community DRR centers with warehouses for DRR equipment.