Recovery and Reconstruction of Disaster-affected Areas

Based on our experiences of and knowledge from the Great East Japan Earthquake, the City of Sendai offers support for recovery and reconstruction of disaster areas by dispatching our staff members and providing relief supplies. To help affected areas to recover and reconstruct as soon as possible, we provide necessary support as required. We also share emerging issues and newly obtained knowledge with the parties concerned, and utilize the experience to enhance Sendai’s disaster prevention and disaster risk reduction. 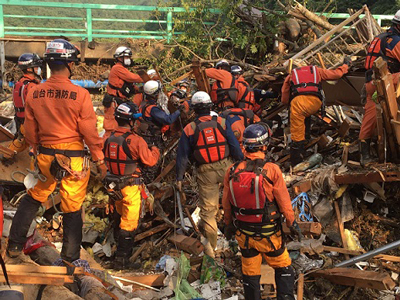 The record rainfall caused by typhoon no. 10, which hit Iwate Prefecture on August 30, wreaked havoc, including human suffering, flooding and sediment disasters, on the Tohoku region and Hokkaido.

To provide the typhoon-stricken areas with support, the City of Sendai sent a total of 178 fire department staff members as a disaster relief team to Iwate Prefecture from August 31 to September 9. The team undertook the missions of rescuing isolated flood victims in Iwaizumi Town and other severely damaged areas.

Moreover, on September 2, the City of Sendai dispatched three healthcare professionals – a doctor, a nurse, and a pharmacist – to Iwate Prefecture as Sendai City Hospital’s DMAT (disaster medical assistance team). In addition, from September 6 to 12, we sent two water trucks and a total of 10 staff members to assist with supplying emergency water. 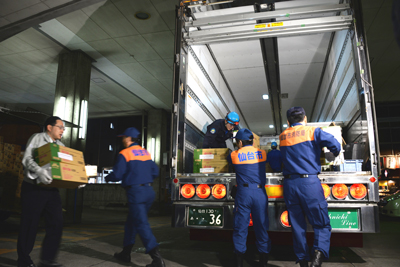 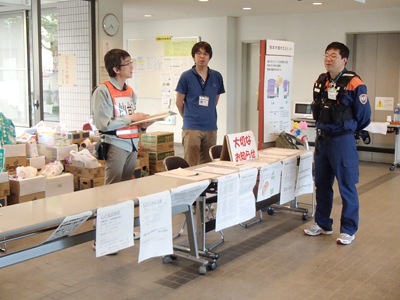 On April 14 and 16, earthquakes with a maximum seismic intensity of 7 struck the Kumamoto region of Kumamoto Prefecture, resulting in serious damage, including human suffering, building collapse and sediment disasters in Kumamoto Prefecture and surrounding areas.

In response, the City of Sendai provided the City of Kumamoto with a wide variety of support, including the delivery of relief goods, the dispatch of staff members, and a donation of 2 million yen as relief money. We are still implementing the long-term dispatch of teachers.

In terms of material assistance, on April 16, we supplied the City of Kumamoto with 11 categories of goods, including drinking water, instant rice, and, based on the experiences of the Great East Japan

Earthquake, items that are often in short supply in evacuation shelters such as formula milk, disposable diapers and wet wipes. Subsequently, in response to requests from disaster areas, we delivered additional items, including emergency portable toilets, emergency drinking water pouches, and portable gas stoves. The City of Sendai also provided evacuees whose houses had been damaged, with municipal housing as temporary accommodation.

f human support, we sent two staff members as an advance party to the City of Kumamoto on April 17 to check the situation on site and the need for assistance. Following this, other staff members were dispatched one after another to the City as advisers. They gave advice and suggestions based on their experiences of the Great East Japan Earthquake, for example, the management and transportation of relief goods, and the management of evacuation shelters and disaster control headquarters.

We are continuing to send staff members as the “Action plan for the association of designated city mayors at the time of large-scale wide-area disasters,” which came into effect in 2014, was applied to the

Kumamoto earthquakes for the first time. According to requests made under this action plan, the dispatched members are helping to manage the evacuation shelters, issue disaster victim certificates, and assess building damage. Moreover, to provide mental healthcare and study assistance for children, who require continuous support, we have dispatched two school staff members for a long period until March 2017. The total number of dispatched personnel is 269 as of October 31.

From April 18 to May 20, donation boxes for disaster relief were placed in the City Hall, ward offices and other places. Donations totaling 1.5 million yen were collected and sent to disaster areas through the Japanese Red Cross Society.

To help affected areas in Miyagi Prefecture recover as quickly as possible, the City of Sendai continues to send staff members to municipal governments in Miyagi from FY2012.
The employees are dispatched to 11 local governments, including Ishinomaki City, Kesennuma City and Minami-Sanriku Town. Public health nurses were sent to Ishinomaki City. There, they were in charge of healthcare support for residents in temporary housing (up to FY2018). The other technical staff members are involved in providing services such as land readjustment, construction of public buildings and improvement of the sewerage system. All members of staff are contributing to the reconstruction of coastal areas.

Details of Destinations (no. of persons)