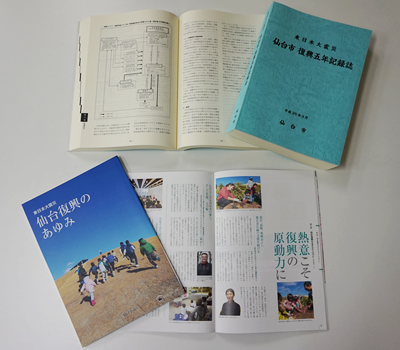 The “Sendai City’s Five-year Record of Recovery from the Disaster”, which describes measures for recovery, reconstruction, disaster prevention and disaster risk reduction, has been published. This record, which systematically arranges the recovery and reconstruction effort, the challenges that have been faced by the city, and the lessons learned therefrom, is intended to be passed down to future generations to help with future disaster preparations. It is regarded as the successor to “Sendai City Record of the Disaster” published in March 2013, which described the first year following the Great East Japan Earthquake. This record was sent to municipalities across Japan.

Through interview articles, “Road to Recovery SENDAI” introduces the various initiatives of the various entities that have driven reconstruction in the city, and was published with the intention of widely communicating the post-disaster reconstruction situation in Sendai and the efforts of citizens in achieving reconstruction.

You can also view them (in Japanese) on the Sendai City Official Website.