Measures for Stranded Commuters with Cooperation from Businesses 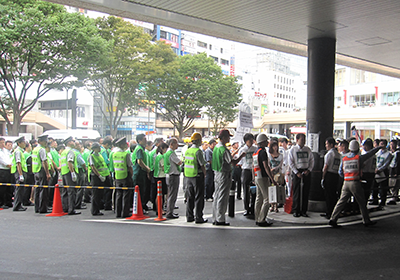 At the time of the Great East Japan Earthquake, public transportation was suspended and many people could not return to their homes. Confusion resulted from non-residents who rushed to nearby evacuation centers, making it impossible for local residents to get into their designated centers.

Using this as a lesson, Sendai City plans to collaborate with organizations and businesses to use train stations, hotels, commercial facilities, and university campuses as temporary lodgings when a disaster occurs. It is expected that, around transport hubs such as JR Sendai Station, about 14,000 people will be unable to return home during a major disaster in the future. The city will cater for these people at the sites.

A “Liaison Council” was established by concerned parties located around JR Sendai Station. In May 2014, they drew up policies to cope with stranded commuters. They include stopping commuters from going home all at once and specifying the measures that people must take, and roles and responsibilities during a disaster, as well as holding disaster drills on a regular basis.