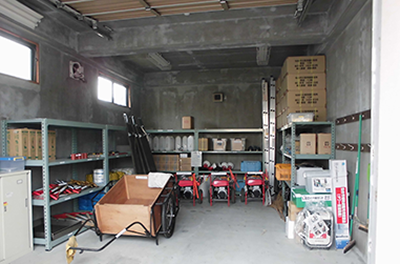 Sendai City encourages each household to stock a minimum of a weeks’ worth of food items, drinking water, and daily commodities as well as medical supplies. We are also stockpiling supplies for the public as part of our disaster preparedness policy.

Sendai City has stockpiled food (6 meals) and drinking water (2 liters) for two days for a maximum of 106,000 evacuees. The city also has items used by women, elderly people, and babies and infants such as powdered milk, disposable diapers, and tent-style private rooms stored in evacuation centers and ward offices. Also, we have 101 Community Disaster Prevention Centers with warehouses of disaster prevention materials and equipment. Simplified disaster prevention materials and equipment are provided for areas without centers. When a disaster occurs, people can use the stockpile of various types of equipment for voluntary disaster prevention activities.

Use of distribution stocks

In 2010, Sendai City introduced a “running stock system” to stockpile goods for disasters- the first case that this system was introduced in an ordinance designated city. Under this system, the goods that the city has purchased, such as disposable diapers, sanitary items, and toilet paper are put in the distribution route of sales companies and stored in their warehouses as part of distribution stocks, and, in times of disaster, the goods are sent to evacuation centers. This system has the advantages of saving costs and not needing a warehouse to store goods. Immediately after the Great East Japan Earthquake, these stockpiled goods were provided to each evacuation center according to this system.