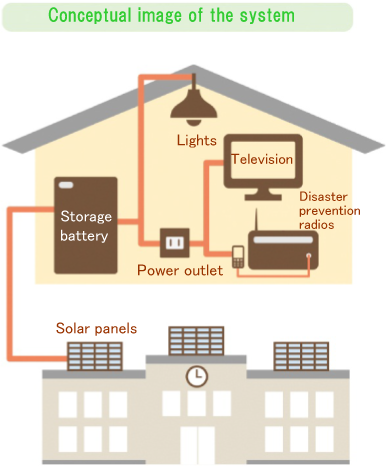 Introduction of the system to designated evacuation centers

Immediately after the disaster, electricity, gas and gasoline supplies were suspended, causing various problems during the initial disaster response such as the operation of evacuation centers.

By FY 2015, based on our experiences of the disaster, we had introduced a solar power generation system combined with a storage battery to 194 facilities, including elementary and junior high school buildings, which are used as designated evacuation centers during a disaster. With this system, a stand-alone power supply is secured when a disaster occurs while reducing CO2 emissions in normal circumstances.

During power outages, electricity is supplied from the system during the day and from the storage battery during the night. This allows operation of information communications equipment such as disaster prevention radios and televisions as well as lamps. 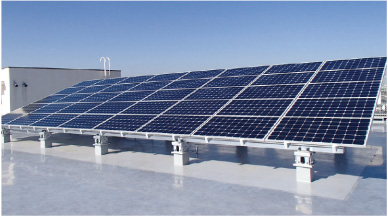 Solar panels on the roof of a junior high school building

Sendai City is subsidizing half of the cost required to install systems for renewable energy sources in private facilities that can be used as regional disaster response centers during a disaster according to the designation under the Sendai City Regional Disaster Prevention Plan.