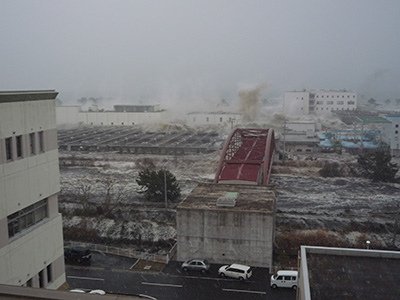 Minami-Gamo Wastewater Treatment Plant flooded by the
tsunami on March 11, 2011

Before the disaster, the Minami-Gamo Wastewater Treatment Plant had been treating about 70% of Sendai’s sewage. On March 11, 2011, a tsunami of over 10 meters in height hit the plant and caused catastrophic damage with building structures broken, its machinery and electrical facilities submerged or swept away, and transmission towers collapsed, resulting in the shutdown of sewage treatment functions.

It was imperative to restore the plant promptly, since it was an indispensable to the everyday lives of the residents in Sendai. Along with removing debris from the tsunami and restoring the facilities and equipment at the plant, we held discussions on how to implement quick recovery. In September 2011, a restoration policy was decided to restore the plant with better functions than it had previously. It took one year to complete the design of a new plant. The plant was constructed in around three years while successfully reducing construction time from the average of ten years that are usually required to complete such projects.

The recovery of Minami-Gamo Wastewater Treatment Plant is
almost complete

The primary and final sedimentation tanks are a two-tray system and the compact reactor tanks are installed underground. The plant is elevated to handle tsunamis of Tokyo Peil* (T. P.) plus 10.4 meters in height and the building doors are water-tight so that the plant is able to resist a tsunami the size of the one that hit Sendai after the Great East Japan Earthquake.

A wastewater treatment and discharge line is secured to allow treatment and discharging of the minimum amount of necessary wastewater without using a pump in the event of a blackout. A solar power generation system is installed. In addition, to reduce the use of commercial power supply, a small-scale hydroelectric power generation system is also installed at the plant.

An approach of “Build Back Better” is brought to the Sendai Framework. With this approach, recovery from the disaster does not simply involve rebuilding the damaged facilities and equipment to pre-disaster standards but includes both restoration and improvements to them to cope with future disasters. The Minami-Gamo Wastewater Treatment Plant has been reconstructed based on this approach. 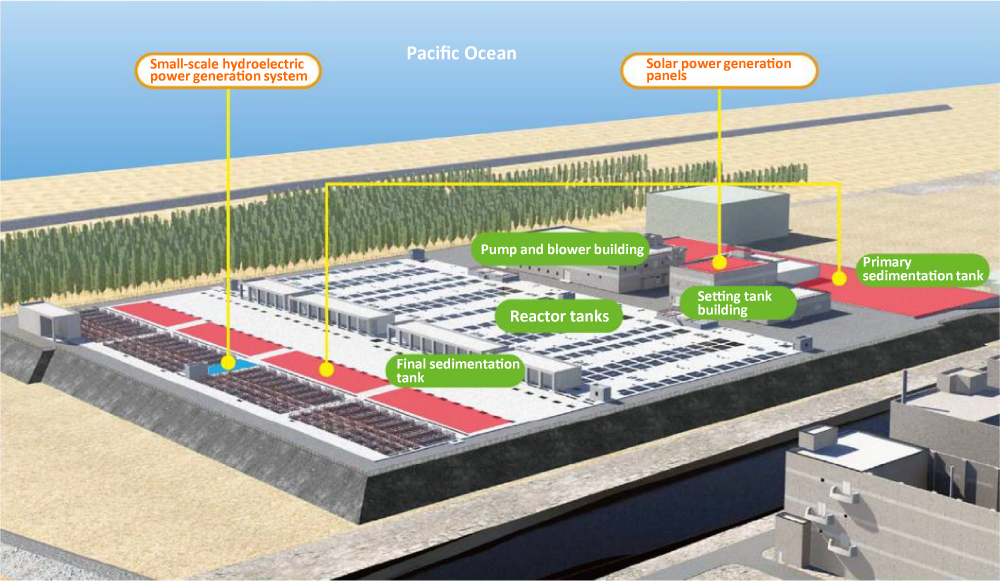